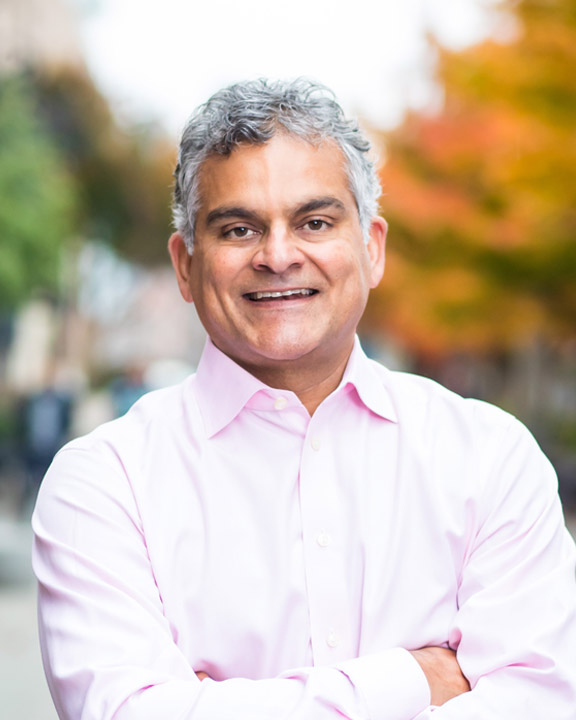 Vivek Varma is vice chair of the Schultz Family Foundation and chief executive officer of emes project llc. In this role, he works directly with Sheri and Howard Schultz to steward the family’s investments and strategic focus on increasing opportunity and reducing inequality for all Americans.

Prior to joining the Foundation, Vivek served 12 years on the executive leadership team at Starbucks Coffee Company. As executive vice president of public affairs and social impact and president of the Starbucks Foundation, Vivek built a world class team while serving as strategic counsel to Howard Schultz during the company’s transformation and the years of record-setting growth that followed. Upon Schultz’s departure from Starbucks in 2018, Vivek helped lead the company’s transition to its next ceo, Kevin Johnson, and took on a new role as chief transformation officer.

Vivek started on Capitol Hill in 1988 as congressional staff serving Oklahoma constituents and working on legislative issues, eventually progressing to lead the Washington DC office of the late Congressman Mike Synar of Oklahoma.

In 1995, Vivek became Executive Director of the Campaign for America Project, a project focused on campaign finance reform that was founded by Rep. Synar with backing from Wall Street financier Jerome Kohlberg.

He holds a B.A. in Political Science from Swarthmore College and a law degree from the American University Washington College of Law.

An avid tennis player, Vivek is a two-time Oklahoma singles state champion, a two-time collegiate All American and a three-time national champion of the U.S. Tennis Association’s Men’s 50 and Over Doubles Division.

He grew up in Chickasha, Okla., and currently resides in Mercer Island, Washington, with his family.